This section is about explanations - when you understand what is happening, you are better equipped to deal with it - and prevent it. 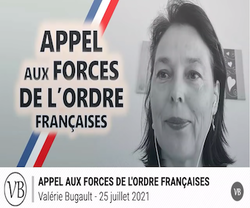 Valérie Bugault: Appeal to the French law enforcement agencies, 3.8.21
​Good evening everyone. I wanted to bring to your attention something which seems to me to be absolutely vital, that today - and everyone, all the French people must be aware of this, especially the law enforcement agencies - today, everything that concerns strategic decisions at the level of communication, at the level of politics, at the level of public health, also at the military level, everything that concerns health strategy has escaped the control of the French law enforcement agencies.
It is about globalist control which takes several forms, but especially it can be considered to be behind the secret armies of NATO, that is to say, an organisation that has developed in parallel with the official NATO, which has been totally disconnected from the legal and official law enforcement agencies of states from the beginning, and which is serving the globalist forces, i.e. in the service of the multinationals and the banks in the service of the New World Order. So these forces are in the process of soon taking official apparent control of our states in the form of a terrible dictatorship. And French law enforcement agencies, military or civilian, really have to be aware that their mission has been hijacked for the benefit of this international mafia, which is working against the best interests of the people and states, and the official political structures.
It is important to understand also that the Fifth Republic has been dead for a very long time. We are no longer in the Fifth Republic because of the multiple reforms of the constitution that have taken place. The current constitution has nothing to do with the constitution of 1958, and even less to do with the reform of 1962 that was introduced by General de Gaulle. It's no longer a question of changing the number of the republic, but if we want to achieve a political state in which the people are involved we need to change the political regime in the sense of reformulating the political organisation of the state. This is what I've proposed to do in all my reforms of the institutions, which starts from the principle that each citizen, each element, each person living in a territory recovers by politics the total organisation in the form of interest groupings. We can discuss this further at a later date. I hope my message will be understood and that it will be shared by the law enforcement agencies because it's you, the law enforcement agencies, who could change the history of France in the sense of France or in the sense of totally dismantling France, knowing that at the geopolitical level we are in the process of a dismantling. All the major powers are eating off our backs and France is going to be in debt for the next 100 years with perhaps, certainly a dismantling of its territory. Thank you for listening and I wish you all the very best.
Powered by