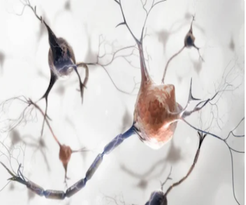 Interfacing Graphene-Based Materials With Neural Cells, 11.4.18
This detailed scientific paper clearly demonstrates how far the development of integrating the very conductive and highly integrative graphene into neurons has already progressed. It also describes how the external heating of the nanoparticles and thus the activation of the neurons is possible from a distance by magnetism or microwave radiation, just like with SPIONs. In other words: remote mind control via the transmitting antennas in the microwave spectrum (5G). Read here. 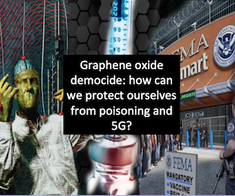 Graphene oxide democide: how can we protect ourselves from poisoning and 5G
Essential reading: comprehensive article on all aspects of graphene oxide. Excerpts:
Magnetism: The magnetic effect is only activated by heat, e.g. as soon as the stuff is in the arm and comes into contact with body heat. Read here. That’s why it was so important that the vials had a continuous cold chain, because otherwise the nurses and doctors who were abused for this crime might have noticed something beforehand.
Invisibility: If there was so much graphene in the syringe, shouldn’t it be pitch black? No, graphene is only one atomic layer thin, so it only absorbs 2% of the light and therefore appears transparent in this dissolved form. Read here. So it is not visible in the ampoule. There are also other possibilities to make the graphene flakes appear “as nothing” in a solution . But where does it come from? Read here. 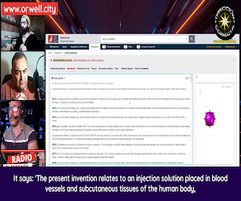 Physiological Saline Containing Graphene, 24.7.21
Graphene oxide could potentially be responsible for the influenza outbreaks of the last few years, as 4G and 4G Plus electromagnetic frequencies would have stimulated it, just as Dr. José Luis Sevillano explained a couple of days ago in the Argentine program Palabras y Verdades.
The patent code is KR20210028062A.
...
And what's this patent? Well, it's a physiological saline solution containing graphene. Therefore, they can no longer deny this in any way, regardless of what fact-checkers say or what the television says. We'll see what the judges say.
This information is going to be presented to the judges. Together with a screenshot of the website in question as well.
It says: 'The present invention relates to an injection solution placed in blood vessels and subcutaneous tissues of the human body, physiological saline solution, glucose solution, Ringer's solution, and the like for the purpose of curing diseases.'
In other words, we're not talking about a technology applied only in vaccines —nanotechnology in this case—, but it has likely been introduced in any type of physiological saline solution containing graphene.
...
The point is that this has been in use for some time now on an ad hoc basis in certain medical treatments, and most likely invasively, as I say, in the 2019 anti-flu campaign. And now, why do we say it was in the anti-flu campaign?
Well, here it says: 'The problem to be solved in the present invention is to disperse 0.2 nm —very tiny, and that coincides precisely with the size of graphene. That is, it would be 200μm, as explained in Dr. Campra's preliminary analysis— of graphene in physiological saline or Ringer's solution supplied as an injection to the human body and use as a therapeutic agent for diseases.'
This opens the door to the possibility that we're not only talking about anti-COVID and anti-flu vaccines but, probably, tetanus, diphtheria, meningitis, etc.
And, furthermore, it would explain why there are children —even babies— who have also expressed magnetism without having been vaccinated neither with the anti-flu nor anti-COVID, but only for the vaccines of the normal calendar (the healthy child's calendar, as it's called). This is obviously very worrying.
As I have said, it's a result of the fact that we're aware that the origin and etiological cause of the disease has been the introduction of this nanomaterial, in this case, in vials. But also through certain administration routes. And it also explains why there are people who express magnetism without having been inoculated, without having undergone the PCR test or without having been screened (swabbed), and without having used masks. This is the explanation. Because they may have acquired it via inhalation. Because we're likely facing a multifactorial attack where all the graphene that has been produced —and that people wondered where it was—, is precisely in people's bodies.
(...)
Because with that patent —the patent KR20210028062A that we mentioned before—, according to the results of the investigation by Info Vacunas channel, they finally identified a Chinese man that we'll have to investigate. But when you have a look at a little bit of what he has done in his life, you learn that he's practically a terrorist. He overloaded ships and caused the death of a few hundred people.
And we're talking about an April 12, 2012 patent. From that point on I infer that this nanomaterial started to be used. Introducing it stealthily to the population, until finally, they said, 'We're going to make it more invasive, and now we put it in the flu vaccine in 2018.'
Let's remember that about a million people died after the flu vaccination campaign. It was a very virulent flu, they said. When the average rate is around 600,000 deaths per year worldwide. Then the first bilateral cases of pneumonia appeared. They were few, but they appeared. And we had, on the other hand, the 4G Plus activated. That's to say, a technology that was already millimetric and scalable. But it lacked a little bit of power, which is what they have given it now. These people have been doing trials since 2012. That's to say, they were hit by the A flu, where they probably wanted to do something similar, or it was the previous step. 4G was activated back then.
Notice how every vaccination period has been linked, above all, to a technological quantum leap. 4G with Influenza A. 4G Plus with that flu that killed a million people, and now 5G with COVID.
And we repeat: we're not saying that 5G alone causes COVID, but that it does harm human biology alone. Yes, it does. But if people now have a fuse —because it's a fuse, a stick of exploding dynamite. Because that's what's going on—, every person who has been inoculated with this substance with that graphene oxide nanotechnology has a fuse, dynamite, a time bomb that's ready to explode by the activation of a microwave.  It's that easy.
I wanted to comment that this is coming very soon. That's why they dare to tell us that now comes the Delta variant, the Delta Plus variant. As if the virus had mutated to an official version and now it has another nucleotide sequence and now it's more contagious. And some people, unfortunately, believe it. This is the problem. Some people believe it.
But everything was easier. It was a passive poisoning, initially active, without the knowledge of the host for subsequent irradiation with that 5G microwave technology.
5G was never for cell phones. It was precisely for people who are vaccinated."
​—Ricardo Delgado, biostatistician and director of La Quinta Columna.