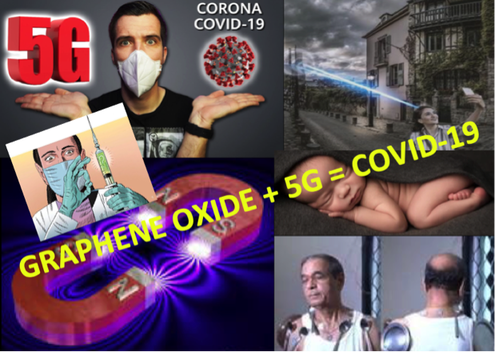 In a new video, La Quinta Columna reveal that graphene oxide (GO) has been found in saline solution and they deduce that the use of GO is much, much more widespread and started much earlier than just the "Covid" vaccines.[i]  Babies have been found to be magnetic, and people who have not taken the "Covid" jab or been PCR tested or worn masks are also exhibiting magnetism, so it has to be coming from elsewhere. They deduce that the GO has been used in all vaccines, including tetanus, meningitis, children's vaccines, etc., for some years. 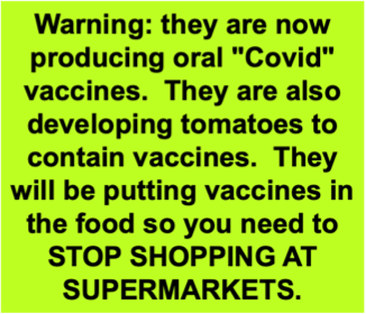 It also accounts for the fact that so many people died in Wuhan. The Chinese government had made the flu jab compulsory for the population right before they turned on the tens of thousands of brand new 5G antennas in Wuhan.  Similarly, the old people in Milan who died had also been flu jabbed and there were a high number of 5G antennas in Milan (see maps of antenna installations in Italy as at March/April 2020, showing the Milan area as having the highest number of “coronavirus” cases). 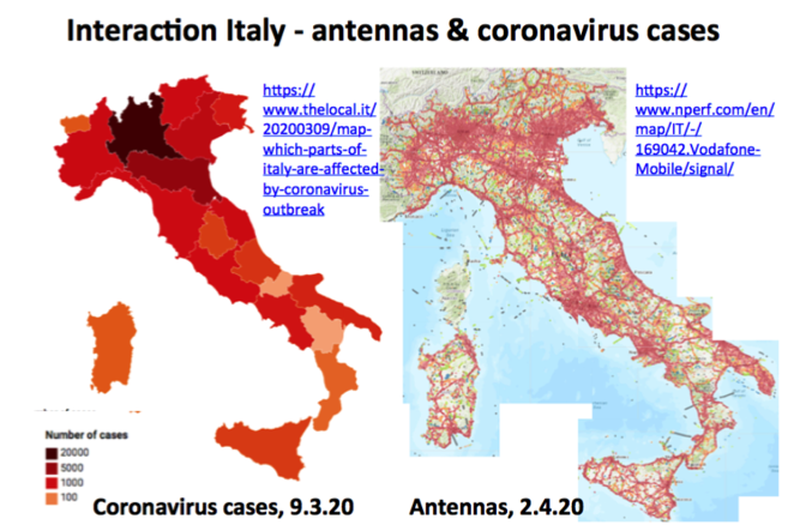 La Quinta Columna reminds us that 4G LTE also uses millimetre waves so it is not just 5G that may be implicated.

Bartomeu Payeras i Cifre published a study on the 5G-Covid correlation in April 2020. He highlighted the fact that San Marino was the first European state with 5G technology and the state with the highest number of “coronavirus” cases per 1,000 inhabitants, 4.07 times more cases than Italy and 27 times more than Croatia, which did not have 5G at that time (see map below). 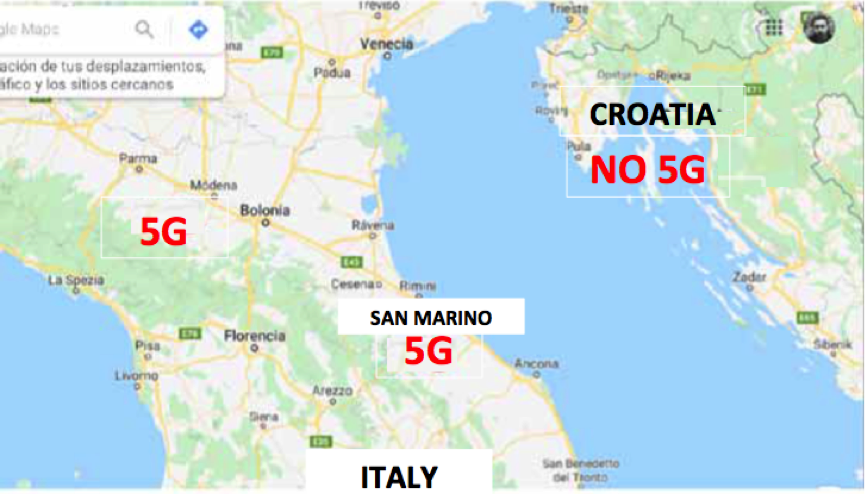 Mr. Payeras i Cifre also observed that “coronavirus” seemed reluctant to cross borders. The average number of infections for the four US states bordering Mexico was 0.242, which was over 2,000% more than Mexico. The average for the US as a whole was 0.814 or 7,000% more than Mexico (see map below).
“Border effect” between Mexico and the USA
Data for 3 April 2020 – infections per 1,000 inhabitants 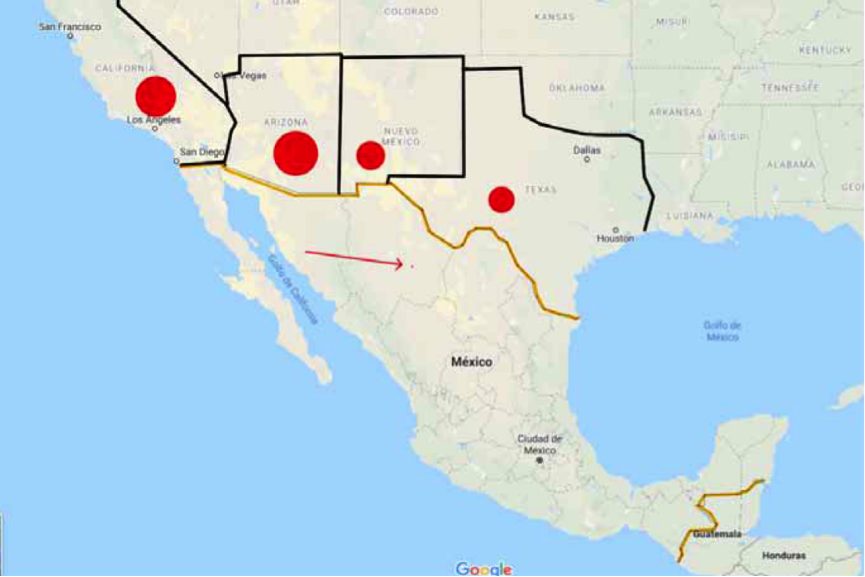 I wonder why it is that all this useful information is emanating from Spain. Even Andreas Kalcker (based in Spain) is on video discussing GO in Spanish.

Ricardo Delgado of La Quinta Columna points out that we should take note that every vaccination period has been linked to a technological leap.  See the graphic below illustrating how each expansion of the use of electromagnetic radiation (EMR) and each new generation of wireless technology has been accompanied by a new disease. 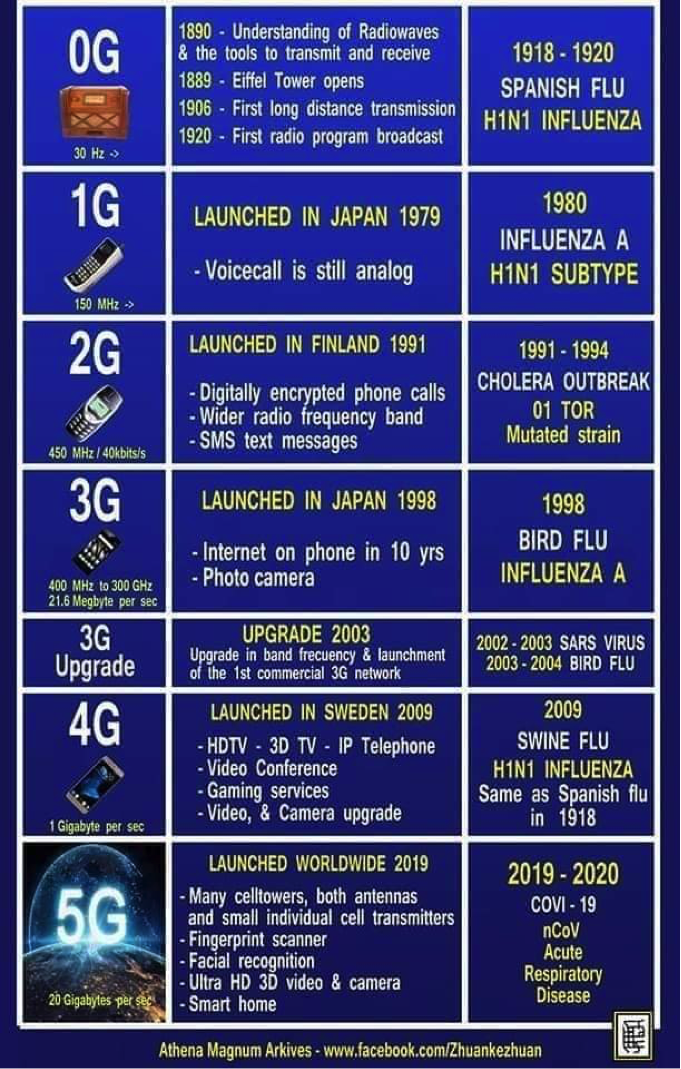 We could add that the so-called Spanish flu occurred six months after the US army started using very powerful radio transmitters at the end of WWI in 1917. Asian flu occurred in 1957-1958 when a powerful radar surveillance system went into use. Hong Kong flu happened in 1968 when 28 military satellites for space surveillance started service. In 1997 when cell phones came into use en masse, there was a 31% increase in diabetes in the US in one year. In the UK between 1994 and 2002, in parallel with the sudden adoption of cell phone technology, the UK house sparrow population declined 75% and it was classed as an endangered species.

Let us also note that in October 2018, just after hundreds of planes had been fitted with brand new on-board WiFi coming direct from satellite, there were mass cases of “flu” on board flights and ambulances had to be called and flights diverted.

Similarly, as we started hearing about “coronavirus” cases on board cruise ships in early 2020, we simultaneously learned that the cruise liners had just rolled out full 5G and on-board facial recognition, with all passengers being irradiated with 5G-ready armbands and pendants.

It was two Italian doctors, Montanari and Gatti, who first warned about vaccines mysteriously containing undeclared nanoparticles in a paper published in early 2018. Among others, they found stainless steel and the highly toxic tungsten carbide in vaccines. For their pains, their homes were raided by police, who removed all their data and computers. In an interview, the two research scientists explained that it is forbidden for nanoparticles to be in any injectable solution because, unlike other nanoparticles we are exposed to which we might breathe and expel most of if our lungs are healthy, injected nanoparticles remain trapped forever and can circulate around the entire body, including the brain, causing dementia and diseases such as cancer and diabetes.

If we add to this the fact that cell phones open the blood-brain barrier to let in toxins, including air particles and nanoparticles from vaccines, we have a very dangerous mix of threats.[i]

I have been saying since the beginning of all of this in late 2019 that there is no "Covid". “Covid” is an umbrella designation for a collection of discrete symptoms, all of which are the same as exposure to electromagnetic radiation. And interestingly, we hear that Barcelona Hospital in Spain has decided to change the name of the department where people reacting to exposure to electromagnetic radiation are treated, so-called “electrohypersensitive” or EHS people, to a “post-Covid” department. How appropriate is that?

But what I did not know in 2020 was that this exposure is being massively enhanced by planting metal nanoparticles in the body.  It is acknowledged in the scientific literature, even by the corrupt, industry shill International Commission on Non-Ionising Radiation Protection (ICNIRP; not international, not a commission, and not protecting anyone against anything, except perhaps the military and telecoms companies against prosecution for crimes against humanity going back decades) who state in their own "safety" guidelines on exposure to EMR that if you have metal in your body it is going to act with electromagnetic fields (EMFs) to make you sick:[ii]

“Medical procedures may utilize EMFs, and metallic implants may alter or perturb EMFs in the body, which in turn can affect the body both directly (via direct interaction between field and tissue) and indirectly (via an intermediate conducting object). For example, radiofrequency ablation and hyperthermia are both used as medical treatments, and radiofrequency EMFs can indirectly cause harm by unintentionally [I didn't know that EMFs possessed intention] interfering with active implantable medical devices (see ISO 2012) or altering EMFs due to the presence of conductive implants.”

Nanoparticles are used in cancer treatments. They are injected into the tumour and then electromagnetic radiation is applied so that each nanoparticle burns out the adjacent cancer cells. This is called “thermal ablation therapy”.[iii] So what happens when you fill the whole body with graphene oxide nanoparticles and then expose everyone to inescapable and ubiquitous electromagnetic radiation blanketing the whole planet, including from satellites and High Altitude Platforms (HAPS) such as gliders and drones in the stratosphere?[iv]

Ricardo Delgado of La Quinta Columna has the answer:

“Every person who has been inoculated with this graphene oxide nanotechnology now has a fuse, dynamite, a time bomb that is ready to explode by the activation of a microwave.”

The answer is that you have a genocide. This was explained in graphic detail by a French engineer in a 2020 video (since deleted by Youtube), but for which we have the transcript:

“For me, these nanoparticles are part of a weapon system that will enable depopulation without mass resistance. So, if you compare that to a system of explosives, the nanoparticle would be the bar of plastic explosive, that is, the active material that’s going to explode. The second thing that would be needed is a detonator. For me, this is the electromagnetic wave that’s going to make the nanoparticle vibrate, and the third thing is the control, I think that we’ve found it now, it’s the idea of 2020 060606,[v],[vi] that is, the subcutaneous vaccination that the masters of the world are going to propose so that they can know where we are and can trace us with 5G. The advantage that 5G has as a detonator is that it can track us. It’s a directed energy weapon. So, we’re traced, they know where to send the wave and they know who they are going to heat up. What do you need in order to have this weapon system operational?  You need to be able to inject the nanoparticles into the body. The only means that seems consistent in terms of the history is to put it in the vaccines.”

What this means is that every adult or child who has received the "Covid" vaccines, and seemingly any other vaccine in the last couple of years, is now a relay antenna and liable to die at any moment from exposure to EMR, but this will manifest as a whole host of different diseases.  And let us also not forget that the geoengineering going on over our heads the whole time is also full of nanoparticles, and probably includes GO as well.

The canaries in the coalmine at the present time are pilots who have been vaccinated. Pilots and air crew are exposed occupationally to very high levels of radiation. Is it any surprise, then, that we hear of four British Airways pilots having died after receiving the jabs and a further five at Jet Blue airlines?  A Singapore Airlines flight had to divert to Moscow airport because a stewardess had a stroke. There are further rumours of pilots from other airlines having dropped dead. 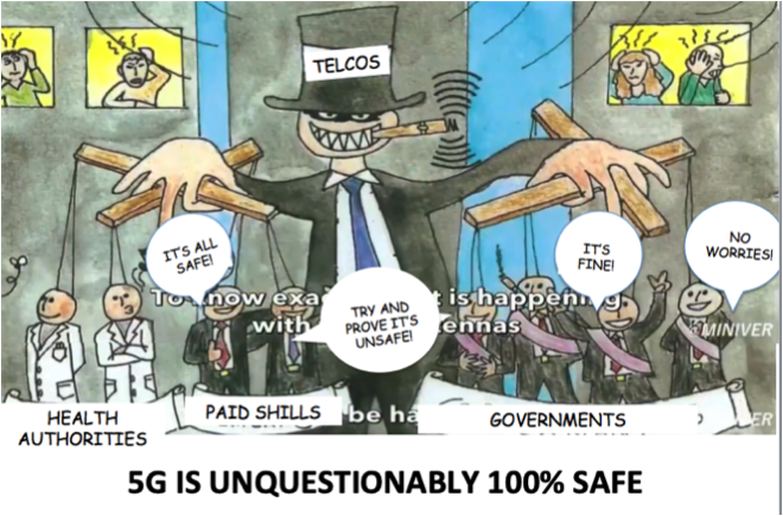 I think we have been the targets of a huge psyop and practically everyone is looking in the wrong direction.  It's all about electromagnetic radiation and that is the key.  Now that everyone who has taken the jab is full of graphene oxide, their only recourse is to follow the precautions that so-called electrohypersensitive (EHS) people adopt and get rid of their mobile phones and all wireless devices and make sure they never come into contact with any wireless technology. Dr. T at Not on the Beeb has also become aware of this and is warning doctors not to put patients suffering from Covid vaccine adverse effects into MRI machines because they will kill them. 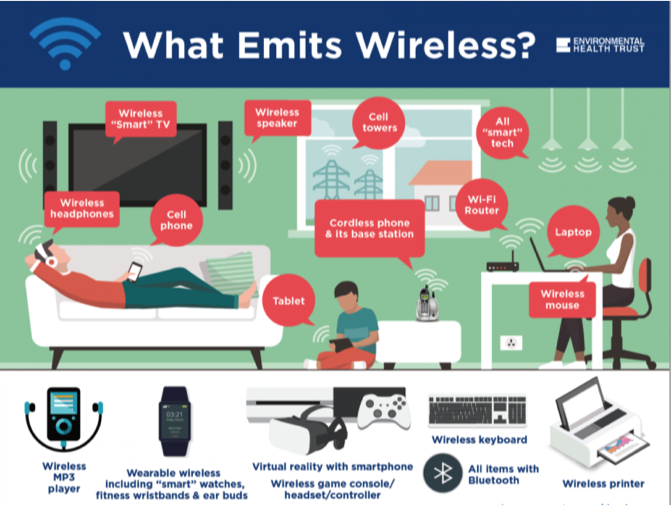 And of course, if governments do not turn off all antennas everywhere in the world immediately (and they don't need to tell us that that is a ridiculous notion when they were quite happy to shut down the entire world economy for the non-existent Covid), then that is prima facie evidence of genocidal intentions, because the scientific literature is unequivocal that metals in the body become antennas when exposed to EMR.

The smoking gun of the Covid conspiracy is the graphene oxide nanoparticles in the vaccines. Now that we know, it must be everyone’s priority to shut down all wireless technology and every antenna on the planet, as well as all 5G satellites. Failure to do so will be a death sentence for the vaccinated.
REFERENCES

[iii] Radiofrequency ablation (RFA): This is probably the most commonly used type of thermal ablation. RFA uses high-energy radio waves for treatment. A thin, needle-like probe is inserted into the tumor for a short time, usually about 10 to 30 minutes. The probe is guided into place using ultrasound, MRI, or CT scans. The tip of the probe puts out a high-frequency current that creates very high heat and destroys the cells within a certain area. The dead cells are not removed, but become scar tissue and shrink over time. Hyperthermia to Treat Cancer.
www.cancer.org/treatment/treatments-and-side-effects/treatment-types/hyperthermia.html

[iv] “Massive constellations of … satellites in low-Earth orbit are being planned and manufactured that … will blanket the globe in low-latency, high-bandwidth capacity” in order to expand the reach of the global Internet to rural and remote areas and complement terrestrial 5G networks.” International Telecommunication Union; United Nations Educational, Scientific and Cultural Organization. Broadband Commission for Sustainable Development. Working Group on Technologies in Space and the Upper-Atmosphere. Identifying the potential of new communications technologies for sustainable development. September 2017. www.broadbandcommission.org/Documents/publications/WG-Technologies-in-Space-Report2017.pdf.

[vi] For a detailed discussion of the proposed vaccine, see French Army Reserve Officers’ Investigative Report on the Covid-19 Pandemic and its Relationship to SARS-COV-2 and Other Factors, chapter 13: Vaccine and electronic chip. ​